Soybean yields across the US continue to advance with better management and higher yielding genetics. In 2016 a new national yield record was achieved and broadly reflected from east to west in the major soybean production areas of the US (Figure 1). As yield levels continue to increase, questions arise whether plant nutrient recommendations developed over the past several decades still apply to fields where soybean yield goals far surpass the national average. Many growers in highly productive area are targeting yields above 70 bu/acre. 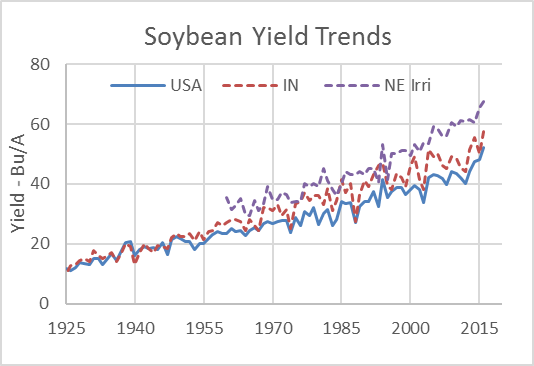 The need for phosphorous (P) and potassium (K) are closely tied to yield level so higher yield levels require more fertilizer to sustain the nutrient supply for future crops in a particular field. But what about nitrogen (N), we know that soybeans fix N from the atmosphere as well as utilizing available N from the soil. We also know that soybeans have a high need for N as they are a high protein crop. Past research demonstrated that soybeans need almost 5 pounds of N taken into the plant to produce a bushel of yield (Salvagiotti, 2008). As yields push past 70 bu/acre can this biological process supply enough N so yield is not limited?

A recent study completed at the University of Wisconsin (Gaspar, 2016) examined N uptake and allocation of nutrients within soybean across yield levels. This team was able to achieve a range of yields results with the high yield data set averaging 82 bu/a to provide a good measure of soybean N need in high yield environments. You may be familiar with the nutrient accumulation charts found in the publication “How a Soybean Plant Develops” (ISU, 1985) which shows the allocation of each major nutrient in various parts of the plant including seed, pods, stem, petioles and stems. The chart for N accumulation from this publication is shown in Figure 2. 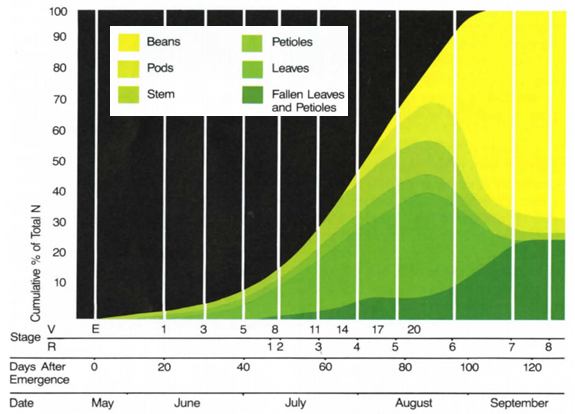 Wisconsin study recreated the same type of charts for plant nutrient uptake. The results from the high yield plots for N is shown in Figure 3. 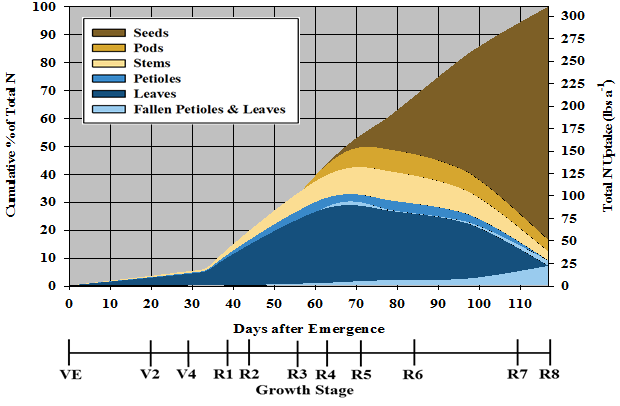 There are several notable differences between the historical data and the new study.

Changes in N uptake by Soybean

In addition to soybean taking up more N later in the season, the Wisconsin study also demonstrated changes in the rate of N uptake in high yielding soybean. Figure 4 compares the rate of N uptake between three different yield levels. The top curve (dashed line) is from plots where yields averaged 82 bu/acre. 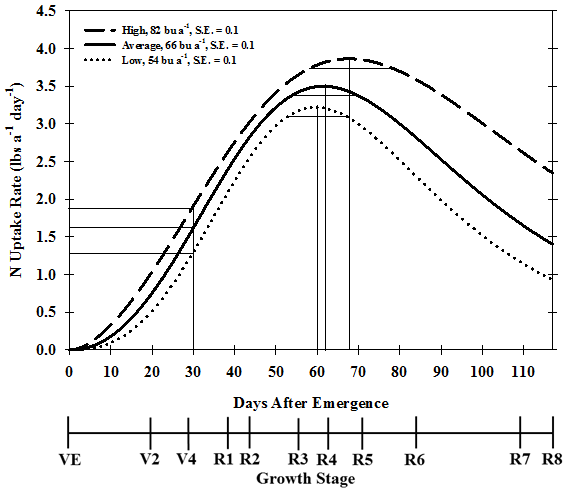 Figure 4. N Uptake Rate by yield level (U of WI)

Note that throughout the season, high yield soybean had a faster rate of N uptake than at lower yield levels from early vegetative stages (V2) through the end of the season. The maximum rate of N uptake peaked later in the season and lasted longer in the high yield environments. Also notable was that none of these research locations received any additional fertilizer N. The N taken up by the plant came from fixation by the soybean plant or from soil N sources.

A significant finding in the Wisconsin study showed that high yield soybean removed substantially less N in the grain than previously demonstrated. Recall that prior research indicated that soybean needed almost 5 pounds N to produce a bushel of yield. The WI work showed total N uptake for 60 bu/acre soybean was 227 pounds or about 3.8 pounds N/bu. Total N removed in the grain was calculated at 3.3 pounds of N per bushel. This is a significant change in N nutrient utilization in modern high yield soybean production.

The Wisconsin study also demonstrated that high yields can be achieved without additional N fertilization. Their high yield plots averaged 82 bu/acre without supplemental N applications. This would support the theoretical N fixation capacity of healthy soybeans to capture up 350 pounds of N/acre (Salvagiotti, 2008). Soil N sources from mineralized soil organic matter can also be a contributing N source. The availability of mineralized N can vary widely depending on percent organic matter in the soil, temperature, moisture and soil microbial activity. Estimates range from 10 to 60 pounds of N per acre available to a growing crop.

The good news is that modern, high yield soybean production has shown a remarkable improvement of N use efficiency in the plant. High yield soybeans have demonstrated higher capacity in remobilizing the N in the plant from stems, pods and leaves to the seed. The plant has also extended the period of N uptake well into the season until seed maturity.

Soybeans demonstrated a large N fixation capacity by the plant as well as utilizing residual soil N to feed the need of high yield levels. Between these two sources of N, the Wisconsin study supports that idea that beans can acquire enough N on their own to achieve up to 100 bu/acre. If we assume that soybeans need to take up 3.8 pounds of N per bushel and we have a yield target of 100 bu/acre, then a total of 380 pounds of N/acre would be required. If the soybean plant has the capacity to fix up to 350 pounds N/acre, then the remaining N need of 30 pounds/acre would come from soil N mineralization. For most soils with reasonable amounts of organic matter, 30 pounds of N should be available in at typical season.

With a better understanding of N uptake and use efficiency plant most growers have a low chance of seeing economical responses to N fertilization to soy. Specific situations where a potential need for supplemental N could occur in soils with very low soil organic matter plus very high yield potential. This might occur in irrigated sandy soils. In these conditions, growers would still want to focus on late season N applications to avoid inhibiting development of N fixing nodules with a preplant or early season N application.