The impact of high temperature and moisture availability on the yield potential of a corn crop is complex. During the grain fill period we monitor temperatures and keep a close eye on the rainfall maps in our attempts to predict what the final yield outcome will be. While drought effects on corn yield are well documented, in warmer years with adequate moisture farmers often ask, “What impact will hot nights have on my yield?” This question is difficult to answer as in any given field multiple variables, in addition to night time temperatures, determine the yield outcome.

Why worry about night temperatures?

Corn began its evolution as a tropical plant and from there has been modified over the centuries to cover a wide geographic range. This tropical beginning provides relatively good heat tolerance for corn. According to Dr. Emerson Nafziger from the U of IL 1, corn withstands temperatures up to 100° F without physiological damage if there is adequate moisture. Other researchers2 report corn can tolerate short periods of temperatures up to 112° F.  Optimum temperature range for corn is typically stated to be 77° to 91° F.

The concern with hot nights is that plant respiration increases with temperature. During daylight, photosynthesis creates sugars the plant uses for growth and yield production. At night, the plant doesn’t stop cell division or cell maintenance but relies on reserves of these sugars to continue the growth process. Higher night time temperatures increase respiration rates and leave fewer sugars available for deposition as starch in the developing kernels. This in turn can limit maximum yield production.

There are no rules of thumb on the corn yield impact that increased night respiration may have due to hot nights. We do know that warmer temperatures, day or night, contribute to more rapid Growing Degree Unit (GDU) accumulation which speeds crop development. This more rapid development can reduce the amount of time and total hours of sunlight the plant has to make yield.

We can illustrate this rapid crop development by comparing two different growing seasons. In our example, we selected 2012 as the “hot nights” and 2014 as the “cool nights” example and used GDU accumulation data from Ames, Iowa. In 2012 much of the corn belt experienced drought conditions and 2012 ranked as the 12th hottest Jul-Aug period in 121 years of weather records compared to 2014 which was the 11th coolest Jul-Aug period on record for this location4. Using the actual GDU accumulation for those seasons we can calculate the grain fill period for a hybrid that begins grain fill (silking) at 1300 GDUs and reaches physiological maturity (black layer) at 2400 GDUs (Figure 1). 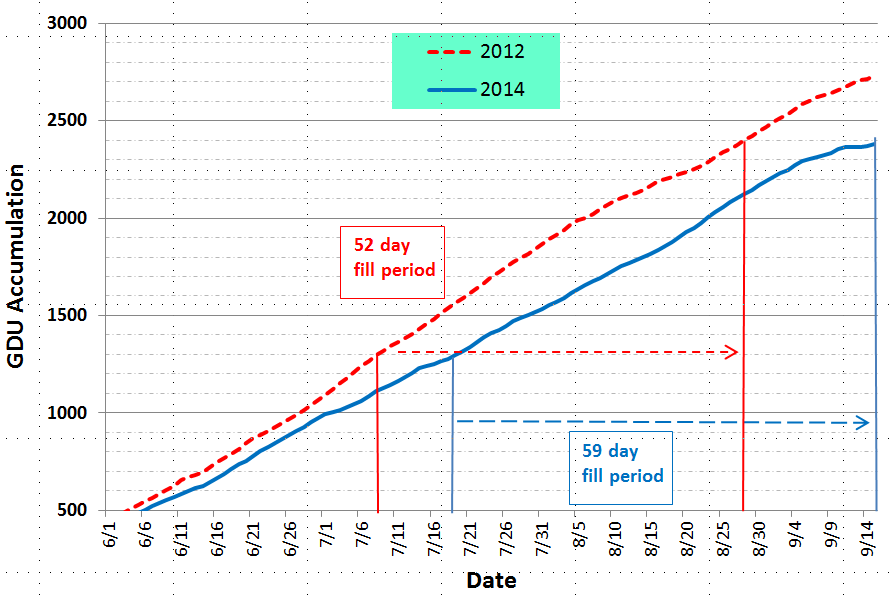 From this example the corn crop in 2012 had seven fewer days of fill period (52 vs. 59) compared to the crop in 2014. This difference represents about a 12% reduction in the amount of fill time between the two years. This “lost” time of capturing sunlight energy and converting to starch in the kernel is one of the components creating yield deficits in hot growing seasons.

With the advent of computer crop models there are now tools that can “grow” a crop in seconds versus months. The ability to hold all other variables constant and tweak certain aspects of the environment is useful in understanding environment and management impacts on the crop. Dr. Roger Elmore, then with Iowa State University Agronomy Department used the crop model Hybrid-Maize to perform a similar exercise in 2010 as what was demonstrated in Figure 1 3. In his study he used weather data from 2010 to run one simulation then replaced the minimum average daily temperature for July 15 to August 15 with data from 2009 to run a second simulation. This enables us to hold the other variables constant and see what the effect of hot nights has on crop performance.  For reference, 2009 was the 4th coolest Jul-Aug period in Iowa during the last 121 years while 2010 was the 20th hottest year during that same period for Jul-Aug. In Dr. Elmore’s comparison he ran simulations for five different locations. Results in Table 1 are for Ames, Iowa to aid comparison to results in Figure 1.

This examination highlights the impact of warm nights as a key contributor to the yield differences observed between growing seasons. The old adage that “rain makes grain” may need to be amended with “but bushels take time” as rapid crop development driven by higher temperatures challenges a corn crop to maximize yield potential.