– When do I switch corn maturities?

Much of the Corn Belt is seeing delayed corn plantings due to first, cold soil temps and then excess soil moisture. It seems like the closer we get to May 1st there are more conversations and questions of when do I start switching to earlier maturities.  I still think for the majority of the Corn Belt the optimum planting date is from April 15th to May 15th with your first choice of corn maturities.  Yes planting in May still will optimize potential corn yield. As an industry we have been telling growers to get in as soon as the soil temp reaches a consistent 50 degrees at the 4 inch mark with a favorable 5 day forecast to optimize the number of days the plant can capture sunlight and growing degree days.  The seed companies have done a nice job of doing research on stress emergence and allowing the growers to pick the best hybrids to plant early.  The industry also has done a lot of work introducing new seed treatments that protect the seedling as it is the ground for extended periods of time and is subjected to stand reducing diseases.  The growers have invested in planters that are larger and can planter more accurate than they did even 5 years ago.  In the last 10 years most growers have increased their planter size from 30-50% with equates to planting 10+ acres more per hour then they did before. These planter size increases allows growers to plant more acres in a day and plant more in a short period of time when the soil conditions are good.

DuPont-Pioneer researchers conducted planting date studies over 18 years, 30 years at some locations. Studies included a range of hybrid maturities across planting dates extending from April through June.  Results indicate that growers should plant full season hybrids in all regions of the Corn Belt until approximately May 27. Switching to an early maturity hybrid prior to this point most likely will not be beneficial and may result in reduced profitability. 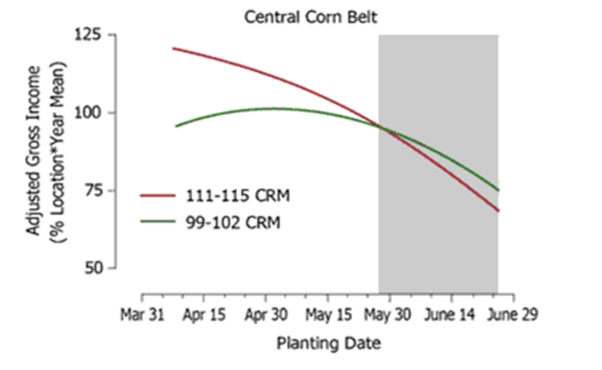 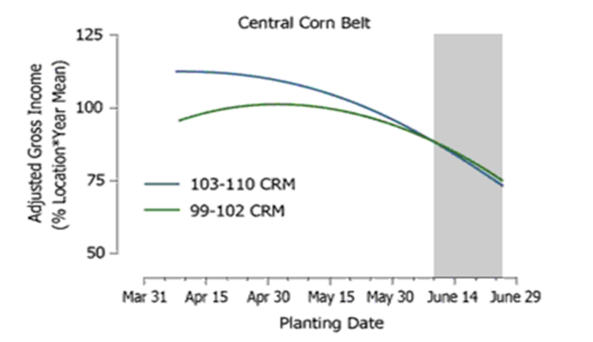 Long-term data show that full season hybrids provide the greatest profitability until approximately May 28 in the north-central Corn Belt. Growers may consider switching to an early maturity hybrid after this point, especially if planting is delayed until June 1 or later when the economic advantage is more significant. 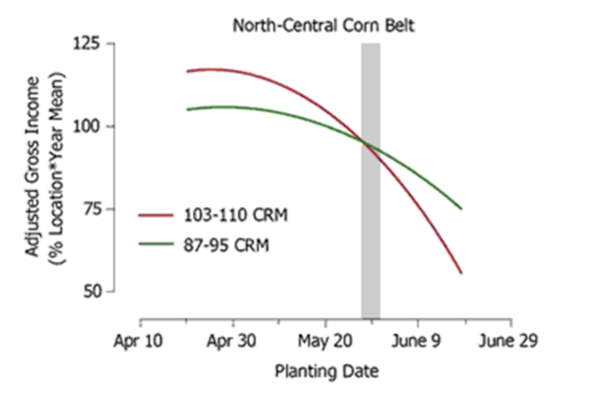 Growers in the north-central Corn Belt planting mid-maturity hybrids should consider switching to an early maturity hybrid only if planting is delayed until after June 5. After June 11, the data indicate a significant advantage to switching. 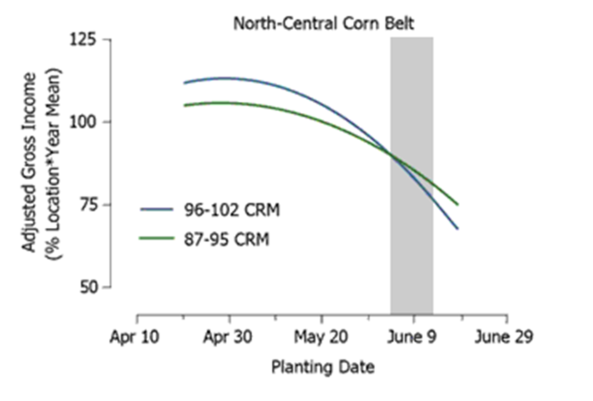 Delayed planting can influence corn grain moisture at harvest, which affects overall profitability. However, the importance of grain moisture must be considered within the context of yield potential and harvest schedule. Early maturity hybrids may allow for earlier harvest timing, but may also have a lower yield potential than full-season hybrids.

By comparing harvest moisture (CRM) ratings, you can estimate the difference in moisture content between hybrids and help plan a harvest schedule. A hybrid with a CRM difference of 10 would be approximately 10 days later to reach a similar harvest moisture level (normally in the low 20’s) if planted on the same date as the earlier hybrid.  These 10 days can be minimized by hybrid response, explained below.

Long-term studies by both DuPont-Pioneer and universities have shown a clear yield and profit advantage for full-season hybrids. When planted in a timely fashion, these hybrids can make use of the entire growing season to reach their full yield potential. Even when planted late, these hybrids often outperform early maturing hybrids by adjusting their growth and development to reach maturity in a shortened growing season.

Corn Adjusts to Later Planting.  A three-year study that was conducted by researchers at Purdue and Ohio State Universities documented that hybrids can adjust their growth and development, requiring fewer growing degree units (GDUs) to reach maturity when planted late.  Averaged over all hybrids, locations and years, 244 less GDUs were required when planting was delayed from late-April or early May to early or mid-June (approximately 40 days). This is an average reduction in hybrid GDU requirement of about six GDUs per day of planting delay.  This study also looked at what grow stage was most affected by the less GDUs required.  ALL hybrids in the study shorted up the time between planting and silking.  The plant allotted less time for vegetative by as much as 14 days.  The interesting part was the next step, silking to physiological maturity.  ALL hybrids increased the number of days of reproductive development by as much as 5 days.  So the summation of these values showed that the plants shortened their life cycle by 9 days total, from planting to physiological maturity.

Even though we have pushed our planting dates earlier every year, long term research shows that the hybrids we have chosen because they are the best hybrids to plant for our piece of ground can be planted into late May.  These hybrids can adapt to being planted later through adjusting the vegetative development stages and have a better chance of being more profitable then switching to an earlier hybrid that was not your first choice.  Make sure a good informed decision is made before switching to an earlier hybrid to soon.