Choosing corn planting date is an important management practice for increasing corn yield potential. Selecting the date to begin planting is a balancing act based on prevailing weather and soil conditions and how fast planting can be completed. To avoid the possibility of delayed planting and resultant yield reductions, farmers have moved average corn planting dates ever earlier. This corn is subsequently at increased risk of encountering cold temperatures and adverse weather systems normally expected for those early spring dates.

Corn is a warm-season crop with tropical origins. It is not surprising then, that corn is susceptible to stresses that result from early planting under cool soil conditions. When corn is planted early, and soil temperatures are below 50° F, it is likely that corn seeds will remain in the soil at least three to four weeks prior to emergence. The length of this period will depend on the soil temperature and its water holding properties. A more common situation for corn farmers is the opportunity to plant early in relatively suitable conditions yet knowing that soil conditions will likely vary in the upcoming weeks. This article will discuss some of the factors that impact a corn seedling’s ability to germinate, grow and establish a stand.

Effect of Cold Soils and Water

Though dry seeds can be stored unharmed for many years at 0° F or below, the temperature of the water that is first imbibed (absorbed) by the dry seed can have a major impact on the growth of the corn seedling. When the dry seed imbibes cold water, imbibitional chilling injury may result. The cell membranes of the seed lack fluidity at low temperatures (become brittle) so do not regulate the entry of water into the embryo which in turn can disrupt enzymatic activity that converts starch in the endosperm into energy for the embryo. Also under these conditions, the hydration process can result in rupturing of cell membranes. Cell contents then leak through this rupture and provide a food source for invading pathogens.

In addition, prolonged exposure to low temperatures reduces seed and plant metabolism and vigor, increases sensitivity to herbicides and seedling diseases and causes oxidation damage due to the effects of free radicals in the cell (Figure 1). Free radicals are unstable molecules that damage cells and organs. This damage is similar to that which occurs in mammals during aging and sun exposure. 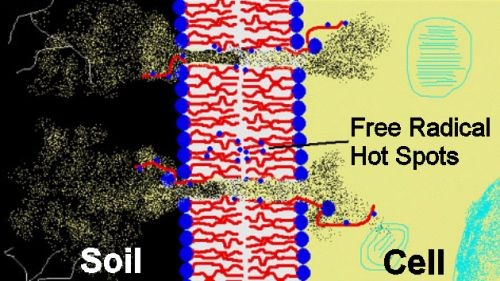 The most critical time period for imbibitional chilling to negatively impact a corn seedling is within the first 24 to 48 hours of planting. The temperature of the first water that seed absorbs can determine the severity of this chilling effect. Allowing time for the seed to absorb warmer water (above 50°) reduces this chilling potential and improves chances of adequate stand establishment.

For much of the corn belt, April to May is a typical planting window. However, as we can see in Figure 2, the daily four-inch soil temperatures do not always follow a steady increase through time. To help avoid potential chilling injury to corn seedlings pay attention to the near term temperature and precipitation forecast. A 3 to 4 day warm period can help alleviate the potential for imbibitional chilling of newly planted seed. Less risk of seedling injury is expected if the seed has a couple days in warmer conditions to begin the germination process and initiate embryo activity before a cool period. 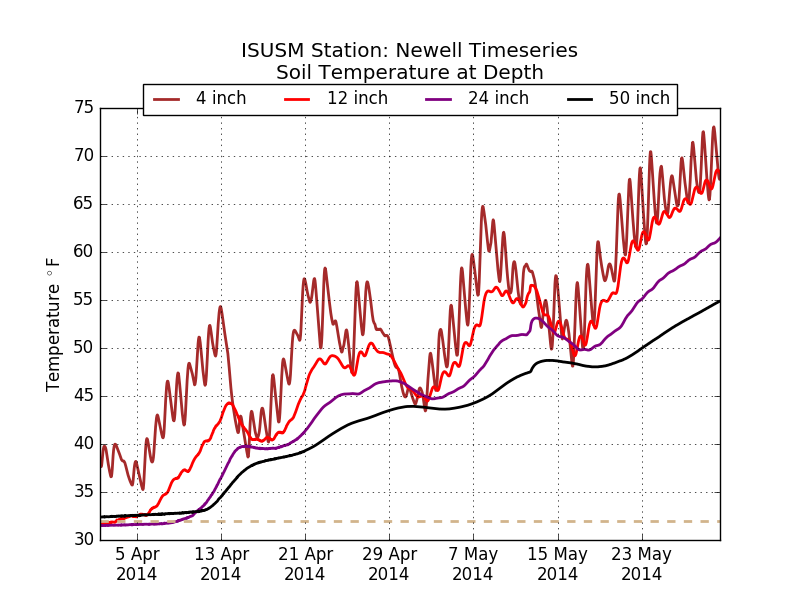 In the example shown in Figure 2, even delaying planting from the third week of April to early May did not alleviate the risk of cold soils occurring. Soil temps declined to average below 50° F after April 29 and did not average above 50° F until May 6. Corn planted into soils on April 28 faced a more challenging environment than fields planted either a week earlier or a week later. Using the short term forecast is helpful in avoiding short periods of temperature stress when deciding on when to plant. However, corn seedlings need soil temperatures above 50° F to progress. The results from research in the northern corn belt highlight the detrimental effects of persistently cool soils on final stands.

* Data for 100 hybrids across all CRMs. DuPont Pioneer Research

There are many factors that influence the success of corn stand establishment from early planting. One of those factors that farmers can react to are current and expected soil temperatures. Waiting until average soil temperatures in the seed zone are above 50° F and having a favorable three day forecast can help reduce some of the stresses that can reduce stands.