What is Brittle Snap?

“Brittle snap” or “green snap” refers to breakage of corn stalks by violent winds, most often occurring during periods of rapid vegetative growth. This weather-related phenomenon is reported most frequently in the Plains and Northern Plains areas of the U.S., where high winds are more common. Violent, damaging windstorms also occur in more eastern corn-growing areas, but less frequently.

During corn’s vegetative growth phase, rapidly elongating internodes are often brittle and susceptible to breakage. The two most common periods for brittle snap damage are V5 to V8, when the growing point is just advancing above the soil line, and V12 to R1, or two weeks prior to tasseling until silking (Figure 1). Brittle snap damage to corn has occurred as long as corn has been grown. Less use of growth regulator herbicides reduced the incidence and severity of brittle snap in the last decade. However, recent increases in weed resistance to glyphosate mean that a broader array of herbicides will be used in the future, and brittle snap risks may increase in some areas.

A corn plant at V5 (five visible leaf collars) is entering a period of rapid change. The growing point is just emerging above the soil, making the plant vulnerable to damage. The nodal root system is beginning to expand rapidly, greatly increasing the plant’s ability to take up water and nutrients to support accelerated plant growth. Rapid leaf and stalk growth follows this root system expansion. Stalk growth occurs by elongation of internode cells, which increases the rigidity of the stalk. Cell walls are extremely fragile at this rapid-growth stage and stalk tissues are at a greater risk of brittleness compared to other growth stages.

At the V5 to V8 stage, many nodes and internodes are arranged together in a small area (Figure 2). This dense concentration may make the plants less flexible and more susceptible to breakage. Brittle snap observed at this stage often follows a surge in corn growth and development stimulated by favorable rainfall and temperature.

Brittle snap breakage at V5 to V8 occurs below the growing point, at a stalk node at or near the soil surface (Figure 1). Snapped plants will not recover, nor contribute appreciably to yield. Tillers may emerge in subsequent weeks, but in most cases will not set harvestable grain, even though they may resemble a small corn stalk. Impact on yield will vary according to severity of stand reduction and subsequent growing conditions. 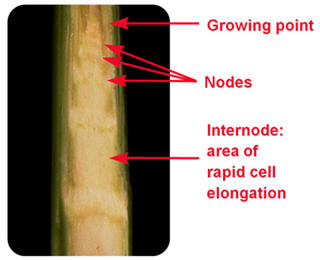 Figure 2. Dissected corn plant showing the developing structures inside the stalk, including the growing point, nodes and internode area.

Yield reduction from brittle snap at the V5 to V8 stage is often less than that occurring when the same number of plants are snapped near the tassel stage. One reason may be that remaining plants have more time and resources (sunlight, nutrients and moisture) to compensate for lost stand when injury occurs earlier in the growing season.

From V12 through tasseling, the corn plant is undergoing its most rapid stage of growth. It will increase in size from 3 feet to its mature height of 7 to 10 feet in approximately 21 to 28 days, or about 2 to 4 inches of growth per day. A key factor increasing the incidence of brittle snap at this stage is the enlargement in leaf surface area and plant height, which increases wind resistance during a period of potentially severe thunderstorms and wind events (late June, July or early August depending on the planting date and growing season.) The most common sites for breakage at this stage are at the nodes – immediately below, at or above the primary ear node.

Plants snapped at this stage often have visible ear shoots on the stalk shortly after the wind damage event (Figure 3). However, the severely reduced leaf surface area usually results in limited or no grain production on injured plants. Upon reaching mature height the risk of brittle snap diminishes as cell walls are strengthened by the deposition of lignin and other structural materials.

The most important factor influencing brittle snap damage is the timing and severity of windstorms. Thunderstorms often occur in the early morning hours when temperatures are cooler. Damage may be more severe at this time of day, since plant cells are more turgid and stalks less able to bend without breaking. Damaging winds often occur in a burst ahead of the rain. Dry, firm soil that tightly anchors the crown and roots of the plant at this time may result in increased breakage. In the same way, strong-rooted hybrids may incur more damage if the plant is prevented from “giving” at the base.

After a severe windstorm, growers often ask why one field has damage when a neighboring field with the same hybrid does not. This is likely because straight line winds can be highly variable across small geographies. This phenomenon is obvious when observing damage to telephone poles, trees or buildings after a storm, so it is not surprising that it applies to corn fields as well. Wind “currents” and “downbursts” result in narrow zones of destruction that often cause more severe damage in one area than another.

In addition to wind impact, any factor that stimulates, or conversely, hinders corn growth and development prior to the wind event can influence the incidence or severity of brittle snap injury. This includes growing conditions, crop management practices, field characteristics, genetics and herbicides.

Even small differences in management or environment can impact the extent of damage, sometimes dramatically. One commonly observed example is planting date. For windstorms occurring at the V5 stage, even a small delay in plant development may result in protection to the growing point by the soil at the time of the wind event. Another example is temperature. Brittleness is greatest in rapidly growing corn under high temperature, high soil moisture conditions. Quick temperature changes that result in a sudden increase in corn growth may dramatically increase the risk of breakage.

Any conditions which promote high yield and rapid growth may, unfortunately, also promote greater brittle snap damage. In fact, it is often the most productive fields with the highest yield potential that incur damage. A long-term study on nitrogen fertilizer rate, tillage and application timing at the University of Nebraska provided an opportunity to evaluate these factors when windstorms occurred (Ferguson, 1995). A July storm produced wind speeds up to 100 mph in 1993, and wind speeds up to 90 mph were recorded in a July, 1994 storm.

In both years of wind damage, breakage increased with increasing nitrogen rates. Damage was greater when nitrogen was applied preplant versus sidedress. Damage in both years was also greater under conventional tillage then no-till. Ferguson concluded that “factors which accelerated crop growth early in the growing season also increased the susceptibility of the crop to stalk breakage.” When evaluating hybrid differences or unexpected hybrid responses (positive or negative) after a wind event, it is important to assess the genetic, cultural, weather and geographic factors that may have influenced the specific experience in that field.

The V5 to V8 stage of development (approximately 10- to 24-inch corn) often coincides with or is followed by the application window for postemergence herbicides. Growth regulator herbicides such as 2,4-D, dicamba or clopyralid control weeds by the disruption of several growth processes including cell enlargement, cell division, protein synthesis and respiration.

Growth regulator herbicides are translocated in both the xylem and the phloem to meristematic regions – areas of cell division and rapid growth – in both shoots and roots. The stalk nodes of corn are meristematic regions. Other meristematic regions in corn under rapid growth at this time are the developing ears, nodal roots and brace roots. Corn injury symptoms such as the malformation of brace roots and the temporary leaning and twisted appearance of plants shortly after application are due to the effect of these herbicides on the meristematic areas of the plant. Growth regulator herbicides can also increase the incidence and severity of corn brittle snap injury by impacting cell division in the nodal areas and increasing brittleness.

Genetic differences do exist among hybrids for brittle snap injury. In exploring these differences, agronomists have often noted a relationship between rapid early growth and a hybrid’s tendency towards brittleness in the early window for breakage (V5 to V8). However, there appears to be less of a relationship between early growth characteristics and increased risk of brittle snap in the near-tassel period. Some hybrids with comparatively slow early growth show increased risk, while other hybrids with relatively fast early growth have exhibited limited risk of injury at this stage.

Because brittle snap is a weather-related phenomenon, it is impossible to completely manage its risk. However there are ways to reduce the risk of brittle snap injury:

An important hybrid trait that can help growers manage brittle snap risk is Pioneer’s brittle stalk score. Pioneer® brand hybrids are rated on a 1 to 9 scale, with 9 indicating least risk of brittle snap injury and 1 indicating the highest risk. The score reflects research and field experiences of a hybrid’s tendency and frequency of brittle snap injury during conditions of rapid growth. The score combines a hybrid’s tendencies for breakage at both the early (V5 to V8) and near tassel (two weeks before VT to R1) window of susceptibility.

Scores reflect the current assessment of a hybrid’s brittle snap tendencies. During the life cycle of a hybrid, the brittle snap score, as with all agronomic trait scores, may be adjusted up or down on the basis of continuing experience. Pioneer’s goal is to accurately reflect the risk of brittle snap across most experiences. The brittle stalk scores do not reflect injury enhanced by or due to interactions with growth regulator herbicides such as 2,4-D, dicamba and clopyralid.

Pioneer employs a continuous, incremental approach to hybrid yield and trait improvement, including brittle snap resistance. Pioneer researchers have addressed this trait in particularly innovative fashion, developing a mobile wind machine that simulates the variety and intensity of winds that occur during violent storms (Figure 4). This invention was needed to help provide consistency and reliability to the hybrid scoring process, as natural storms causing brittle snap injury are infrequent and notoriously unpredictable.

Pioneer’ proprietary 20-ton machine is capable of creating measured, reproducible turbulent winds of up to 100 mph that can sort out susceptible and resistant hybrids and genetic material. High-throughput testing is conducted at multiple developmental stages and multiple environments across North America. Results are compared with natural weather events to ensure the viability and predictability of the data. This extraordinary technology, currently in its eighth year of use, has helped characterize and improve Pioneer’s hybrid offerings for brittle snap resistance and overall standability – essential traits for successful production as plant populations and grain yields are pushed ever higher.

Fawcett, R.S. 1992. Corn breakage why and how. Fawcett Consulting.